On Thursday morning, the official Shark Tank Twitter account of Kevin O’Leary, nicknamed Mr. Wonderful, began advertising cryptocurrency giveaways in the form of bitcoin and ethereum. The account claimed that O’Leary has chosen to donate 5,000 bitcoin and 15,000 ether. Since he has gained so much money from cryptocurrencies in recent years. In addition, the tweet contains a link that enables readers to participate in the fraudulent cryptocurrency offer.

According to the O’Leary Twitter account, it has not been hacked and the freebies are legitimate. A fabrication that Mr. Wonderful said last night on CNBC. That he would give away some cryptocurrency for real was also included. 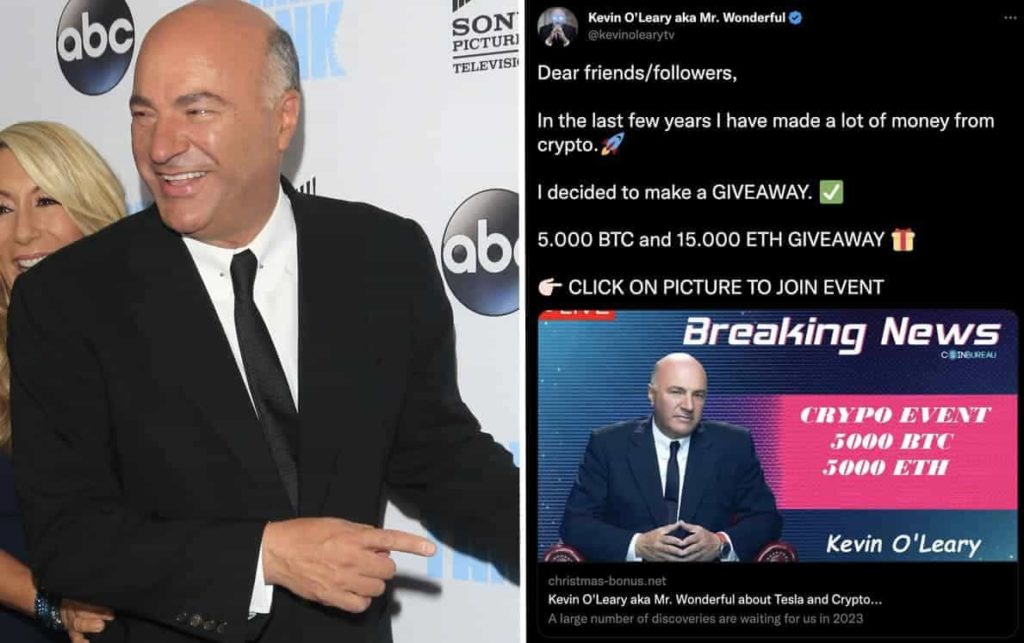 Crypto scams target unsuspecting people, and you could be one of them. A crypto giveaway scam, like the one in question here, is a popular type of scam designed to get people to send scammers their cryptocurrency. Scammers impersonate a celebrity online, normally choosing one associated with crypto such as O’Leary. They send messages claiming to be holding a giveaway for anyone who wants to participate. The link to the “giveaway” includes a crypto wallet address, instructions to send funds to verify your own address, and a promise that you’ll get twice as much or more back.

Scammers keep all the cryptocurrency they’re sent as part of the supposed address verification and never send anything back. Since cryptocurrency transactions are irreversible, the victims have no way to recover the funds they send.

If you own cryptocurrency, or you’re planning to buy some, it’s imperative that you know how to protect yourself. When you send your cryptocurrency to another wallet, it’s gone. There’s no way to dispute the transaction and get it reversed. Cryptocurrency doesn’t have the safeguards of traditional financial products, like credit cards or bank accounts.

Understand too, what you should and shouldn’t be sharing about your crypto assets. You wouldn’t give out a credit card number, address, and security code to a random website, nor should you be giving out details of your crypto holdings.

Remember that if your credit card gets hit with a scam, you usually have an ally in the financial institutions backing your card. That’s not the case with crypto. Don’t get fooled by crypto giveaways, no matter who announces them. It’s OK to be skeptical, and if it seems too good to be true, it probably is. The fact that hackers were able to share a scam through O’Leary’s Twitter account is another sign of how careful you have to be.

“I put about $9.7 million into crypto. I think that’s what I lost. It’s all at zero. I don’t know because my account got scrapped a couple of weeks ago. All the data, all the coins, everything. It was not a good investment. Then I lost the money I invested in the equity as well, those are zeros too,” he said.

FTX investors have filed a lawsuit against O’Leary among other celebrities claiming that the exchange’s ambassadors should have done more research and been more careful before endorsing the cryptocurrency company.

The recent incident won’t have done O’Leary any favors within the cryptocurrency community, who are already distrustful of the entrepreneur and media personality as a result of the FTX marketing.